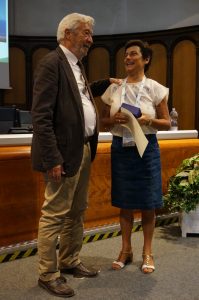 It is with deep sorrow that AIA announces the passing of Dr. Renato Spagnolo, its honorary and acoustic partner of great scientific depth.
Having graduated in physics in 1971, Renato Spagnolo subsequently began his research activity at the “Galileo Ferraris” National Electrotechnical Institute (now the National Institute of Metrological Research), under the guidance of Professor Gino Sacerdote.

His scientific career has seen him engaged in various fields of acoustics, such as the study of the effects of noise in the workplace, the measurement and numerical simulation of the relevant parameters in building and architectural acoustics, the development of photoacoustic techniques, measurement of the speed of sound in liquid and gaseous media and the application of ultrasound to biomedicine.

In these areas, it has promoted the development of new laboratories and new research initiatives and has trained many young researchers. He was a director and  vice president of the Galileo Ferraris Institute at the most critical moments in the history of this institution and was one of the promoters of the process that led to the creation of the new metrology institute, INRIM.

In parallel with the research activity, Renato Spagnolo has carried out a continuous teaching activity, dedicating himself to postgraduate specialization courses, doctorates and masters. For more than a decade he oversaw the Acoustics course of the Master’s Degree in Physics at the University of Turin.

Author or co-author of about 200 papers in national and international journals, he has published some widely circulated university texts, including the “Manual of Applied Acoustics”, published by De Agostini Scuola and, in 2015, “Acustica. Fundamentals and applications ”, published by UTET.
In all areas of activity, students, collaborators and colleagues remember him above all for his very strong political and human awareness, expressed in the defense of the free dom of research and in the struggle to extend the rights of the workers involved in it.

AIA member for about forty years, Renato Spagnolo has actively contributed to the growth of the association. He was a member of the Board of Directors for some mandates, invited speaker at numerous AIA events and organizer, in Turin, of two national conferences, in 1998 and 2009. In 2007 he assumed the position of Director in charge of the Italian Acoustic Review (RIA) taking care, with dedication and competence, the substantial renewal of both graphics and content and carried out this task until 2014, the year in which the magazine went online. In 2018, AIA wanted to recognize his high scientific depth and the significance of the roles he assumed within the association by appointing him AIA Honorary Member.

Renato Spagnolo leaves the Italian acousticians with a wealth of knowledge of inestimable value and will continue to live in the memory of those who had the privilege of knowing him.

This website uses Cookies that provide a proper navigation. Necessary Cookies are stored in the browser and are essential to ensure basic functionalities. Third-parties Cookies (Non-Necessary) are stored in the browser only with the explicit consent of the user. The can be disabled but this can influence the proper navigation through the website.
Necessary Always Enabled
Necessary cookies are absolutely essential for the website to function properly. This category only includes cookies that ensures basic functionalities and security features of the website. These cookies do not store any personal information.
Non-necessary
Any cookies that may not be particularly necessary for the website to function and is used specifically to collect user personal data via analytics, ads, other embedded contents are termed as non-necessary cookies. It is mandatory to procure user consent prior to running these cookies on your website.
SAVE & ACCEPT